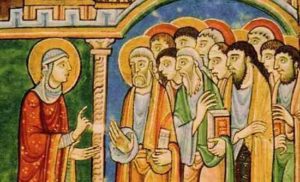 I have started writing a column for Preach magazine, in which I explore a significant word or phrase in the Bible and the ideas that it expresses. The first one was on the phrase ‘Word of God’, which you can read here. The second one, published in the Winter edition of the magazine (Issue 21), was on the question of ‘mission’. The odd thing about considering this from Scripture is that the word occurs nowhere in the Bible! But there is no doubt that the biblical narrative depicts a God who has a mission, and one who calls others to join with him by being sent to those whom he wants to reach.

Most would agree that ‘mission’ is an important idea in Christian ministry and Scripture. How strange, then, to realise that the word (in the sense we normally use it) doesn’t occur anywhere in the Bible!

This is because ‘mission’ is an abstract noun, and most often the Bible deals with concrete actions. And the term is derived from the Latin missio, the act of sending someone, which in turn derives from the verb mittere, meaning ‘to release, let go, send or throw.’ This gives us our way in to understanding what Scripture says about mission: God is constantly ‘sending’ people.

The Beginning of Mission

The story of God forming his people Israel starts with God’s call to Abraham: ‘Go from your country, your land and your father’s household to the land I will show you…’ (Gen 12.1). This involves a sharp disruption in his situation, relationships and occupation—though continuing a journey that his father Terah failed to complete (Gen 11.31). God doesn’t specify exactly where Abraham will end up, and is commissioning him for a task that seems humanly impossible—both of which will demand that Abraham trusts God like never before.

The same pattern is seen in God’s call to Moses hundreds of years later. The offspring of Abraham have grown numerous, in fulfilment of God’s promise, but are enslaved in Egypt. Once more, God disrupts Moses’ situation and relationships to send him ‘to Pharaoh to bring my people the Israelites out of Egypt’ (Exodus 3.10). Moses will no longer be tending sheep but leading God’s people, and every stage of the task looks humanly impossible. This time the commission includes proclaiming God’s words, both to Pharaoh and to the people themselves.

Even when settled in the promised land, the people need saving from those who oppress them, and God sends ‘judges’ or leaders to rescue them, including Deborah, Gideon and Samson (Judges 4, 6 and 13). The means of commissioning follows no obvious formula; Deborah appears already to be an established leader of the nation (Judges 4.4), whilst Gideon experiences an extended call and commission. But the theological pattern is clear and consistent: the people cry to God; God hears their cry; God sends a rescuer (see Judges 6.7–8).

A similar pattern is seen in the long line of prophets. Many (like Isaiah, Jeremiah and Ezekiel) recount specific experiences of God’s call and commission, which often features the discontinuity that Abraham faced. In his enigmatic statement that ‘I am not a prophet nor the son of a prophet’ (Amos 7.14) Amos is making clear that his mission to call God’s people back to God’s law arises from God’s intention and not his own. Whilst many prophets are ‘sent’ to their own context and people, Jonah is sent on a literal journey—though once more the impetus comes from God’s concern for people who need to hear of his judgement and mercy.

God’s sending of people to rescue his people marks the opening of the gospel narratives, in the ministries of both John the Baptist (‘I send my messenger…’ Mark 1.2; ‘you will go before the Lord…’ Luke 1.76) and Jesus. Jesus is ‘thrown’ (ballo) by the Spirit into the desert, and the Spirit then sends him to ministry in Galilee before he determines to complete his mission, ‘setting his face’ to go to Jerusalem (Luke 9.51). As Jesus has been sent, so he sends others—first the Twelve, then the 72 (Luke 9, 10). Here, mission is not about ‘seeing what God is doing and joining in’, but seeing what God (Jesus) wants to do, but cannot until those he sends go and proclaim the good news in word and deed ‘in all the places Jesus wanted to go’ (Luke 10.1)

The Hebrew terminology of halach (‘go’) and shalach (‘send’) is now replaced by the Greek terminology of poreuomai and apostello, from which we get the word ‘apostle’. As Jesus was sent by the Father, so he sends his disciples (John 17.18, 20.21) to proclaim the message of divine love and rescue. In John 20.17 Mary is sent, as ‘apostle to the apostles’, to tell the others that Jesus is alive, so that they might then tell others who in turn pass on the good news. Peter is then ‘sent’ to his own people the Jews, whilst Paul is ‘sent’ to the Gentiles, as before on the initiative of God’s own call and commission (Acts 13.2). All this is summed up in the Great Commission: ‘Go and make disciples of all nations’ (Matt 28.19).

The Mission of God

God continually reaches out to his world, and most often does this by calling, commissioning, releasing, sending and even sometimes throwing his people into the task of proclaiming the good news of his invitation to be saved from judgement. This is what it means to be ‘one, holy, catholic and apostolic’ church. Tim Dearborn sums it up well:

It is not the church of God that has a mission in the world, but the God of mission who has a church in the world. The church’s involvement in mission is its privileged participation in the actions of the triune God. (Beyond Duty: A Passion for Christ, a Heart for Mission p 2)

(The image is of Mary Magdalen announcing the resurrection to the apostles from St. Albans Psalter, St Godehard’s Church, Hildesheim (c. 1123). 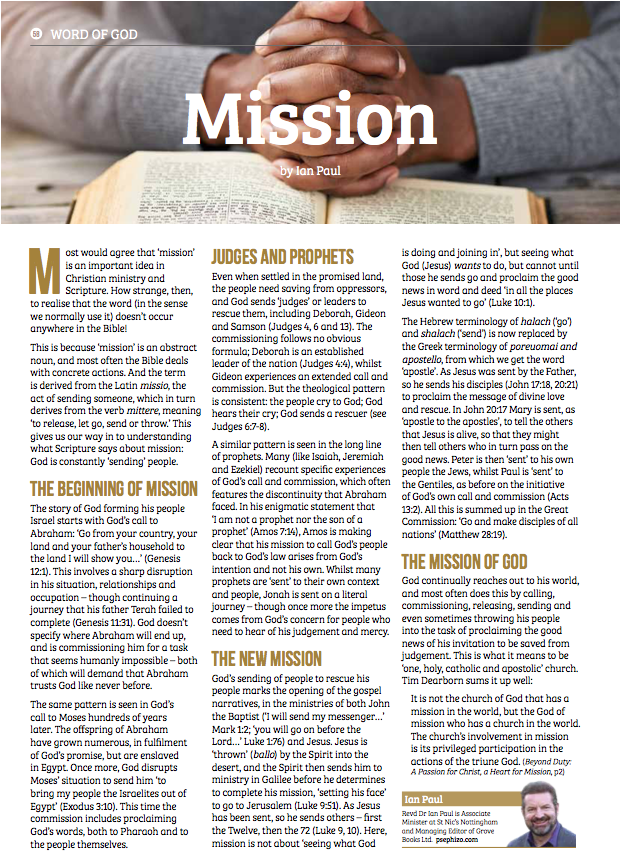 5 thoughts on “Does the Bible believe in ‘mission’?”