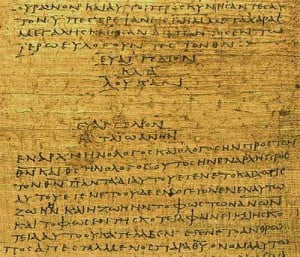 This is a question I quite often get asked in relation to conversations with Jehovah’s Witnesses and the New World Translation (NWT). The NWT translates the end of John 1.1 as ‘the Word as a god’ in order to avoid the identification of Jesus with the God of the Old Testament, and avoid seeing Jesus as God incarnate, part of the Trinity, as does orthodox Christian belief.

As we will see, this is an incorrect translation of the Greek text. It is quite straightforward, though sounds a little technical to explain. Here goes.

The Greek of John 1.1 is as follows, transliterated into English letters:

If you don’t read Greek, you need to know a couple of things. The first is that the word ho is called the ‘definite article’ which in English would be translated ‘the.’ The second is that Greek does not have an ‘indefinite article’ (English ‘a’), but instead simply omits the article. The term for this is ‘anarthrous’. The third is that, whereas in English we show what words are doing in a sentence by word order, in Greek this is shown by what case a word is in. Each word can be in one of four (or five) cases—the subject of a verb (often the thing doing an action) is always in the nominative case.

You can see near the end of John 1.1 that we have theos without an article, and logos throughout with the article.  The reason is that, in any phrase where the main verb is ‘to be’, there will not be a subject and an object (as in ‘I pat my dog’ where ‘I’ am the subject and ‘my dog’ is the object of the action), but only subjects in ‘apposition’, that is, agreeing with one another.  So when I say ‘My pet is a dog’ both ‘pet’ and ‘dog’ are subjects, and in Greek would be in the nominative case.

The question is: how can I tell the difference in Greek between the sentences ‘My pet is a dog’ and ‘My dog is a pet’ which have quite different senses. (The first is telling you which animal I have as a pet, the second is telling what kind of relationship my dog has to me.) In English, we do it by word order, but you cannot do this in Greek since, as an inflected language (ie one with different cases), it is flexible in word order. And you cannot do it by the usual trick of different cases, since both are in the nominative as subjects of the verb ‘to be’.

In neither case does being anarthrous correspond to the English sense ‘a’, the indefinite article. So to translate this as ‘The Word was a god’ misunderstands the significance of omitting the article.

As this sounds rather technical, I always find it more fruitful to read with Jehovah’s Witness Romans 10.13, ‘Everyone who calls on the name of the Lord will be saved.’ The Greek here uses the word kurios; in the Greek Old Testament that Paul is citing here, this refers to Yahweh, the god of Israel. But Paul here clearly means ‘The Lord Jesus.’ The NWT appears to be embarrassed by this, and substitutes the word ‘Jehovah’. But it is very clear that in doing so the NWT is changing the text of Scripture.

Something similar happens in 1 Cor 10.9, where the word Christos in Greek is also substituted in the NWT by ‘Jehovah’.