Simon Jenkins has a wonderfully witty article about the theological significance of beards over at Reform Magazine. (That’s the magazine of the URC, not the other lot!). It was prompted by the arrival through the post of a Jesus Shaves mug, where a bearded Jesus becomes clean-shaven when you fill it up with hot tea. (It is now on my Amazon wish-list if you want to buy me a present!) He goes on to reflect on the historical and theological coming and going of facial hair.

There was a time, of course, when beards covered a multitude of chins. There was Moses and St Paul. There was Nebuchadnezzar with his knitted beard and Pharaoh with a little wooden goatee held in place with the Egyptian equivalent of elastic. There was Elijah and Jeremiah and other monumentally angry Old Testament saints.

But Jenkins avoids answering the question that his mug purchase actually provokes: did Jesus have a beard? And how would we know?

One way would be to look at early Christian iconography of Jesus. But, as the very helpful article on Wikipedia points out, the image of a fully bearded Jesus with long hair did not become established until the 6th century in Eastern Christianity, and much later in the West. The earliest depictions of Jesus have him portrayed as a beardless philosopher or teacher, in line with contemporary assumptions about what such person would look like. Interestingly, he was later depicted with a beard for the same reason. You can check for yourself at this chronological collection of 100 depictions of Jesus, including many of the earliest known.

The reason for this is, I think, something parallel to what was going on with Christian symbolism at the time. Ben Witherington makes this observation:

One might see this as indicative of a lack of creativity, I suppose. But personally I prefer to think of it as indicative of a broader trend in this period in which Christians boldly claimed a wide spectrum of pre-Christian concepts, traditions, and items for their own re-signification. This, I suggest wasn’t a lack of creativity, but instead represented their view that the world belonged to their God and that this God’s purposes could be detected and expressed in a variety of things from it.

This is in marked contrast to the depiction of the apostles, such as Peter and Paul; Philip Esler has demonstrated that the iconography from the early period onwards is very stable, indicating that we do have an accurate idea of what the two of them looked like.

In the Old Testament period, there seems to have been a general assumption that men would be bearded, and so we find beards mentioned fairly frequently. But this changes in the New Testament, where the word beard does not occur at all (though in fact the iconography of Peter and Paul both have beards, Paul’s being a goatee). Philo only mentions beards once in all his writings (Embassy to Gaius 1:223 ) and Josephus does not mention “beard” or “shaved” in relation to any Jew of his time, although he does talk about beards of Old Testament characters. Beards were first in, then out of fashion amongst Greeks and Romans from around 300BC, and then back in fashion after around 100AD—so in Jesus’ day the fashion was to be clean-shaven. It is interesting to speculate how much such fashions would have affected life in ‘Galilee of the gentiles’. There is a good account of the changes in fashions in this article.

In 2001, the BBC produced a documentary called Son of God, exploring issues of the historical Jesus, and featuring Tom Wright quite heavily. The climax to the programme was a reconstruction of what Jesus might have looked like, assuming he was a typical Galilean of his day. Mark Goodacre, of Duke University, and NT Blog fame, proposed that Jesus’ skin color would have been darker and swarthier than his traditional Western image, and that he would have had short, curly hair and a short cropped beard. I agree with the idea of short hair: Matthew had to twist his vocabulary in Matt 2.23 ‘He will be called a Nazorean’, which he would not have had to do had Jesus had long hair; and Paul could hardly have called long hair a ‘disgrace’ (1 Cor 11.14) if Jesus was thus adorned. But I think he was wrong about the beard.

So why do I disagree? The trial accounts in the gospels all mention the different things that were done to Jesus in terms of physical abuse. He is beaten and spat upon by the temple guards and High Priest (Matthew 26:67–68 and Mark 14:65); he is similarly mistreated by the Roman soldiers in John 19.3, and Matthew 27:30 and Mark 15:19 include him being hit on the head. Perhaps not surprisingly, Luke gives the most detail:

The men who were guarding Jesus began mocking and beating him. They blindfolded him and demanded, “Prophesy! Who hit you?” (Luke 22.63–64).

In these descriptions, the gospel writers appear to be consciously echoing in their descriptions one of the ‘Servant’ passages in Isaiah (these passages exercised a huge influence on NT understandings of Jesus):

I offered my back to those who beat me,
my cheeks to those who pulled out my beard;
I did not hide my face
from mocking and spitting. (Is 50.6)

What is striking here is that Isaiah talks of the ‘servant’ suffering from mocking and spitting and beating and pulling out the beard. the Gospel writers, on the other hand, talk only of the mocking and spitting and beating. If Jesus had had a beard, there is no doubt it would have been pulled. If it had been pulled, there is no doubt that the Gospel writers would have noted this, because it would bring Jesus even more into line with Isaiah’s servant.

Bu why does this matter, part from simple curiosity?

First, it shows that the Gospel writers were constrained by the historical reality they were dealing with. There is a gap in their application of the Isaiah text in its shaping of their descriptions of Jesus’ trial. The only plausible explanation is that their accounts were even more shaped by what actually happened. In other words, when matching the events that happened to the fulfilment of Old Testament texts, it seems as though the OT texts were fitted to the events and not the events to the OT texts. The prime example of this is in Matthew’s account of the nativity, where his five-fold citation of Old Testament prophecy being ‘fulfilled’ seems forced if not a little bizarre.

Secondly, question of Jesus’s physical appearance relates to a key theological and pastoral question: was he really human? Can we picture him? As I look around the church today, I think I can see some pretty strong docetic tendencies. And it is interesting to note that the Gospel writers appear to have no interest at all in Jesus’ physical appearance. (There is, of course, plenty of interest in his physical activity, not least in John’s Gospel where he is tired, hungry, thirsty, tearful and so forth.) The challenge for the first generation of Jesus’ followers was to understand this human person, whom they had known, as part of the identity of God. Our problem is precisely the opposite: to understand this person who is part of the identity of God, as being a real flesh and blood human being. 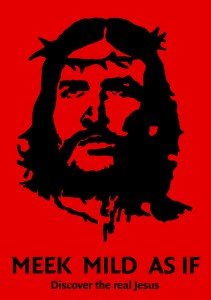 11 thoughts on “Did Jesus have a beard?”