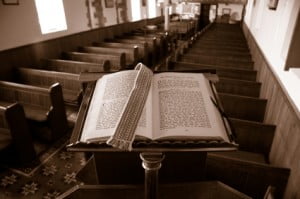 Here are some final comments on 1 Tim 2.8–15. Earlier comments on this passage can be found here and here.

Creation order
The creation order in 2.13 has been interpreted as suggesting Adam is more important than or has authority over Eve, though of course we have seen that this is no part of the text of Genesis 2. Moreover, the connecting word used here (gar, ‘for’) elsewhere typically introduces an explanation, not a cause (to offer a cause, another word hoti would be used).

This explanation suggests a corrective both to myths about Artemis, who was created first and only subsequently took a male consort, and possible misunderstandings of Paul’s own teaching. In Rom 5.14 and 1 Cor 15.22, Adam is said to be the origin of sin; misreading this as Adam the first male (rather than Adam the first human being) might suggest that women had no part in sin, which Paul corrects here by noting that ‘the woman’ was deceived. Elsewhere (2 Cor 11.2), Eve’s deception becomes an example of what is possible for both men and women; the point here is not that women are more sinful than men, but that they are just as sinful as men.

Understood as such a corrective, this idea fits with the sense of mutuality of origins set out in 1 Cor 11.12, which also has a preceding corrective in a context where ‘spiritual’ women appear to want to dispense with marital and sexual relations (1 Cor 7).

‘Saved through childbirth’
This is a strange phrase, which has commonly be taken to mean that women will be saved if they stay with their allotted roles of marrying and having children. But this is the one thing it cannot mean, not least in the light of the emphasis in the Pastorals on salvation by grace received through faith (see 1.15 and 2.5).

There is a possibility that the verse is referring to being ‘kept safe’ through childbirth, but the verb here (sozo) is elsewhere in the Pastorals always used to refer to salvation (as in 1.15, 2.4, 4.16) and another word is used for this kind of deliverance (rhuomai, 2 Tim 3.11 and 4.18, also common elsewhere in Paul). It is possible that there is an implied double negative here. Fulfilling the normal duties of motherhood will not jeopardize salvation for women; there is no need to become ‘super-spiritual’ and leave behind these ‘earthly’ concerns.

But the word for ‘childbirth’ has a definite article; it is ‘The Childbirth’ and so some have argued that it means that salvation has come through the fact that Mary gave birth to the Messiah. Either way, it would make good sense to see this as part of the letter’s correction to prevailing views; (the) childbirth should continue to be honoured even in the new age of the Messiah; we are not yet ‘like the angels’ (Matt 22.30).

First-century Ephesus
Although Paul is not writing specifically to the church in Ephesus, it is clear that Timothy is exercising his ministry there (1 Tim 1.3). A number of commentators have suggested detailed reconstructions of the social setting here and what the letter might be addressing. I am not sure that these in themselves settle the question of what the verses here mean, since the details are inevitably speculative.

But all commentators agree that the context is of importance, and that there are some key issues which must feature as background. The first is the presence of the temple of Artemis in Ephesus, which was not only a wonder of the ancient world, but a significant element of commercial and social life in Ephesus and in the wider region of Asia (see Acts 19.23f). Second, and related to this, is the presence of teaching in some strands of the Greco-Roman world that women were superior to and more spiritual than men, and that they no longer had need of men. (1 Timothy is clearly addressing at least in part the concerns of women [and men] of wealth and influence in 2.9 and 6.9–10). The third is that, with differing levels of education between men and women in most parts of the ancient world, there was a serious danger of woman assuming leadership and authority without adequate education.

All this makes good sense of the picture emerging from careful exegesis of this text, as a corrective that, far from suggesting hierarchical order of men over women, is restoring equal partnership in the face of arguments for a hierarchical ordering of women over (or independent of) men.

Reading Paul together
For those reading this as a general prohibition on women teaching or having authority over men, the other texts in the NT create something of a problem. It would be very difficult to harmonise such a reading with practice elsewhere not only in Paul, but in the gospels and Acts.

Within the Pauline texts, it has been suggested that 1 Tim 2 should provide the key to reading other texts in Paul, and take precedence over earlier teaching wherever there is a conflict. But this goes against Paul’s own assumption of the importance of early traditions (as in 1 Cor 15); such apostolic traditions presumably form the core of the ‘sound teaching’ which 1 Tim focuses on and which is to be held on to. It would also suggest that corrective teaching on aspects of church order are for some reason more central to Pauline theology than his understanding of the Spirit in which the teaching of 1 Cor 11 and 14 is embedded. And to judge the significance of Paul’s teaching by its lateness would suggest justification by faith is less important to Paul since it comes in his some of his earliest writing in Galatians.