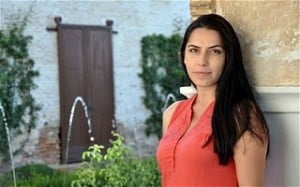 This week saw the broadcast of the third and last of the series with Francesca Stavrakopoulou supposedly exposing the real meaning of the Bible and thus over-turning centuries of tradition. My reflections on the previous two episodes can be found here and here.

In some ways this episode exhibited the same issues as the first two, though I thought the arguments much less coherent, with more evidence of jumping to unfounded conclusions without setting out any logic. But particular issues surfaced here too.

1. Space for reflective faith?
It was striking that the programme began with two examples of faith-based understandings of Genesis that functioned as ‘straw men’ for FS to neatly demolish. The first was a literalist reading of Genesis, where Vinnie Commons commented:

If I can’t trust Genesis 1 and 2, why should I trust any other book?

What Vinnie (and Francesca) of course omit to point out is that trusting in Genesis 1 and 2 as straightforward historical narratives is different from trusting them as part of Scripture, since it imposes on them a particular understanding of what kind of literature they are. The problem here is not the text, but our assumptions about what it is.

In treating faith in this monolithic way, she squeezes out the possibility that some Christians might be critically engaged and reflective about faith, and concerned that believers, whilst not being simply rational, might nevertheless be asking reasonable questions of their own faith, and finding reasonable answers. Today I noticed that on the back of a book I was reading was the logo of IVP Academic, with the tag line:

The contents of the programme showed no signs that FS had encountered this tradition of thinking. It struck me that, in some ways, the most difficult group of people to understand is the one that is in many ways closest to you, and yes has a different view. I think that quite often non-faith-based biblical scholars have a hard time understanding their faith-based opposite numbers; perhaps it is reciprocated.

(Curiously, she also uses monolithic language about scholarship too, about ten minutes in claiming that ‘scholars agree…’ that Genesis was written in the first millennium BC. There is little about which, within theology, you can say ‘scholars agree that…’!)

2. Suspicion or trust?
Another theme that was showcased strongly in this programme was a serious intellectual scepticism about the text of the Bible (though, as before, conflated with popular mis-readings of the Bible.) Once more we met ‘hidden within the Bible…’, ‘but I think…’ and ‘what it is really about…’ liberally sprinkled through the programme.

Intellectually, what FS is demonstrating would be called a ‘hermeneutic of suspicion’, that is, the basic orientation towards the text is one of mistrust. We cannot take it at face value, but must deploy our critical skills to unmask the reality which is being concealed. Now, this is a necessary element of thinking carefully about anything. But if we are to understand rather than just critique, this approach must be complemented with a basic trust that we can read and understand. This is sometimes called a ‘hermeneutical of retrieval’, following the approach of the French philosopher and interpreter Paul Ricoeur (whom I studied for my PhD). Without this, our reading becomes skewed and lop-sided.

(What was curious was how, once again, this approach was used inconsistently; towards the end of the programme there was quite a lot of discussion about what the biblical writers ‘intended’, language most commonly used by those reading less critically.)

3. Sophistication and naivety
Another striking feature of this programme was, alongside the supposed sophistication, some oddly naive arguments. The two weakest concerned the idea of Adam as king, and the garden as the temple.

FS was clear that the text originated at the time of the exile, which she rightly pointed out is a common view. (This says nothing, of course, about the origins of the story, only about when it might have found its final form as a written document.) So she drew the parallels between Eden and a cultivated, walled garden of a king (no problem there)—but then jumped the conclusion that Adam must have been a king, and so the story was ‘really’ about sixth-century BC kingship. This moves exhibits both a naivety about how contexts influence texts, and an ignorance of the text; there is little in Genesis to suggest Adam had a kingly role. This is a real shame, because this is an interesting line of reflection; there is king who walks the garden of Eden, but this is God, and kingship is a theme inasmuch as humanity is styled as a vice-regent, ruling in God’s place. 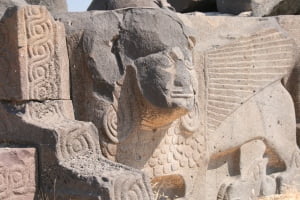 The second was the parallel between the parallel between the Jerusalem and the temple found at Ain Dara, decorated with Eden-like plants and flowers. Again, there was a naivety about directions of influence. FS decided that this must be a sign that the story was ‘really’ about the temple, ie that the temple design shaped the story. But isn’t it equally plausible that the story shaped the design of the temple, that the now-lost presence of God in the garden might be re-expressed or re-experienced in the presence of God in the temple? And having looked a the similarities between the two temples, she failed to explore any possible differences. A distinctive of the Jerusalem temple is the cubic shape of the Holy of Holies, something given theological significance in the Bible, particularly in its re-use in the Book of Revelation.

Although the ideas here were presented as being grounded in an academic endeavour, once more at beginning and end it was made clear that the agenda was much wider than this. Her argument would undo the need for a saviour, the need for baptism, the sense of guilt of humanity, and the role of women. (On the latter, she repeats the error of conflating the sense of the text with the way readers have misused it; the text itself never says ‘It is all the woman’s fault’, and in fact Paul locates sin with Adam.) In other words, FS’ agenda is about seeing the world quite differently. As someone commented to me in relation to human sin:

Feel much better for watching that knowing that the world is in fact perfect. I can sleep much more soundly now. Think I’ll just go and turn the burglar alarm off and unlock the front door while I’m at it!

Conclusion
Have these programmes been of any value? Well, if they ask questions of poorly considered, naive understandings of Scripture, then I guess there is some value. But the whole series has set up a false dichotomy between naive faith and sophisticated scholarship. Faith need not be about a leap in the dark, a blind trusting of something in spite of the evidence, but a leap into the light, a rational-conditioned decision to trust. FS started the programme with a black-and-white statement:

I’m not a fundamentalist who takes everything in the Bible as fact. I think the truth is much more interesting.

If the programme has made people realise that there are more than these two alternatives, I suppose it will have been worthwhile.

One thing that it does highlight is the constant need for reform—the reform of faith by an informed reading of Scripture—including within traditions based on the principle of reform, as well as other Christian traditions. The problem is that we all get too attached to our own ideas of what the Bible means, rather than looking—and looking again—at what the Bible actually says. If I am to be faithful to Scripture, I need continually to be ready to see with new eyes, even if that means letting go of cherished ideas of what I have thought (possibly for many years) the Bible meant.

This doesn’t mean that everything is up for grabs all the time—there are things central to Scripture and central to faith that have stood the test of time. But it does mean that all human interpretation will have something of the provisional about it. I won’t be able to be 100%, cast iron certain about what Scripture says, but I will be sure enough—sure enough to stake my life on it, no more and no less.